It started twenty-five years ago when I became intrigued by this hobby after watching my mother, a Certified Handwriting expert, analyze doctors, lawyers, and professional hockey players’ handwriting. It led me to ask her “how she did this and what else one could tell from a person’s hand-written letters?”

Little did my mother know I would parlay that little know skill in front of the most talented writers and comedians of our generation twenty years later behind the scenes at Saturday Night Live in New York City.

I remember my mother telling me the height of t-bars represents how high or low their goals and esteem. The length of a t-bar and its thickness represents the persistence and enthusiasm of a person in the attainment of those goals.

Since I was a child, I have had a passion for examining people’s minds through handwriting and have even become a certified handwriting analyst and gave a well received TEDx lecture in Luxembourg on the topic of Leadership in Handwriting.

I studied writing samples like John F. Kennedy, who was a supremely logical decision-maker in stressful situations.  I saw Steve Jobs signature who was a visionary with high goals. Through the science of handwriting analysis, I discovered a skill that fascinated just about every person I met. People love to hear about their favourite subject: themselves.

After an amazing series of interviews and meetings with high level Saturday Night Live legends, I found myself with an entry level job at the coolest TV show in the world.  (I explain the whole story in my latest book “Live From Your Class – Everything I learned about teaching, I learned from working at Saturday Night Live”

Upon my arrival in New York, I inspired some curiosity from young staffers at SNL. Just after I arrived, there was a Christmas party. In the days leading up to it, a memo went around the office that anyone with a hidden talent would be welcome to show it off then. 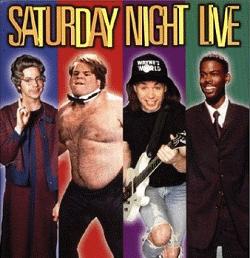 There were talented singers, jugglers, and magicians amongst the twenty-something workers on my floor. As a way to deflect the daily

barrage of questions I was getting and in an attempt to ingratiate myself, I quietly offered one of the organizers to put my name down to do handwriting analysis. I didn’t expect anything would come of this.

On the day of the party set for the evening, new colleagues introduced themselves to me. I didn’t know what to make of this until a Broadway Video Producer said, “For those of you who don’t know, Jamie Cohen, who just joined us two weeks ago from Toronto, Canada, is an expert handwriting analyst.”

Before I could jump in and correct her, she continued, “…and he volunteered to do readings for all of us tonight.”

There were over fifty people at this gathering. I thought nobody would care. It’s hard to impress skeptical New Yorkers – but they started gathering around me, not one or two people, but about forty.

The remaining ten new colleagues were standing at the back of the scrum to see what would happen. I went from the mysterious Canadian to the quirky dancing monkey at the Christmas party.

I said to the producer who introduced me, “I thought people were going to show their ‘hidden’ talents tonight?”

“Yeah, well, no one signed up… except for you,” she said.

Great, I thought. Instead of trying to slip under the radar or maybe make a few connections with staff, a sense of panic set in, in that all eyes would be glued on me, waiting for me to fail. What happens if I give a wrong reading on a trait? What happens if I give an inaccurate description of a personality trait? How do I frame an on-the-spot analysis in such a way as to not publicly humiliate the person and make an enemy within my first few weeks in my dream job?

These were some of the questions that went through my head as I set myself up for a near impossible situation. Usually at that time, it would take me an hour to sit quietly with a piece of handwriting and analyze a trait before making evaluations based on the complex and paradoxical combinations of qualities that exist in a person. A person’s writing is a reflection of their individuality, as diverse as snowflakes.

I didn’t have one hour to sit with each piece of handwriting. I had thirty seconds for each analysis which I had never attempted before. I took a deep breath, feeling that even getting to this moment was improbable enough from where I was, in my parents’ basement less than one year ago, so I dove in. 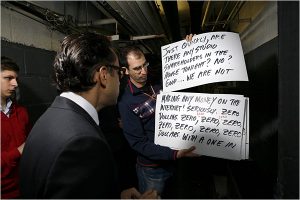 One after the other, barely looking up, I stared down at a signature plus a sentence and told the person two positive things about themselves and one thing they probably would like to improve. I carefully chose adjectives to describe how they respond emotionally to a given situation. I pondered whether or not they liked spicy foods.

I told them if they were passionate about collecting something. I revealed if they live in the moment or have long-term plans. I showed whether they had a few trusted friends or many acquaintances they keep in touch with over a lifetime.

As I went through each one, many people said, “Wow, that’s so true.” As is usually the case, a few cynics shot down whatever I said as being too general, palm-reading kind-of-stuff.

I told one skeptic that he’d been working very hard in the past month to develop an exercise habit. I was right. The criticisms became quieter as the night went on. Handwriting experts are not supposed to give people time frames like that because it’s a science, not a psychic predictor, so it’s a risk. However, there’s a time to be bold to see how good your skills are and I took the chance.

About two hours later, I looked up. Most of the staff were staring at me with a sense of respect and intrigue. Some people in the room were clapping. Others waited around to ask me to elaborate even further on my initial insights into their writing.

A decade later, I would use this skill when I did the same on-the-spot analysis of colleagues at the private high school where I teach.

After two hours of analysis, a group of rabbis sought me out to expand on my comments about how philosophy and spiritual ideas show up in handwriting. It has led to me doing packed handwriting analysis talks for high school teachers, performing for a synagogue congregation, in front of a packed crowd at a media executive’s home, and doing a relationship seminar for couples through their writing. You never know where a passion will take you.   My fascination for learning about handwriting analysis culminated in the opportunity to do a TEDx talk on in Luxembourg titled, “How to spot a leader in their handwriting”.

Work with Jamie about your own handwriting, your kids, or your teaching career
Handwriting University Authorized Mentor:
http://jamiemasoncohen.com/jamie/index.html