How to Spot A Liar Through Handwriting

Lying and keeping secrets are mental habits which we can get accustomed to very easily.  If this habit is not handled in childhood, then kids grow up to be adults who lie when the truth would have been better.  Some people lie even when they don’t have a clear purpose to do so.

Most people think lying is always bad.  But, what if is just another defense mechanism which has spiraled out of control? 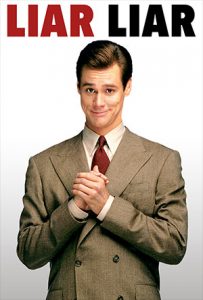 The science of Handwriting helps you understand the difference between tiny “white lies”, “secrets”, and the dreaded “pathological or compulsive liars”.  This insight gives you deeper insight into their motive. It helps you understand how the act of lying or telling only half the truth makes total sense to them. And, be damned you for not understanding!

Read on to know how you could spot the various degrees of honesty and lying very easily from a short sample of cursive handwriting.

Our ability to communicate and our capacity of knowledge are based on the false assumption of honesty.  The better assumption is that most people are motivated by security and safety first.  If they grew up in an environment where the truth created “pain” or “the threat of pain”, then lying to avoid that pain became an acceptable defense mechanism.

Some people lie more than others.  Most people don’t always tell the whole truth… if they did, they would be despised and called “blunt.”  What do you say when a woman you care about says, “Do I look fat in this dress?”

In that moment, some secretiveness or white lie is always the acceptable answer to keep you out of trouble.

There are also big liars that seem to be honest at the surface, but their levels of self-deceit and defensiveness are so high that they get caught in a lie and make up more lies to cover up their transgression.  “It’s your fault I lie. Because you can’t handle the truth.”

Here’s how you can read secretiveness from a writing sample: 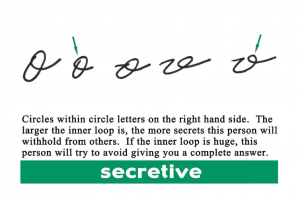 When circled letters have circles within them towards the right, you can make out that the writer does not reveal much, withholds information, and is therefore secretive. The bigger the loops, the higher the intensity of hiding things from others.

Just like a lot of other positive traits like confidence, humbleness or generosity are an outcome of all the past experiences accumulated in the subconscious.

Lying is an outcome or defense mechanism of negative experiences or fears. More often than not, the liar himself is suffering and deceiving himself to avoid looking foolish or feeling rejection from others. Handwriting Analysis helps you expand your understanding of the human condition and gives you an innate understanding of subtle traits that are impossible to see without spending months and months with someone. 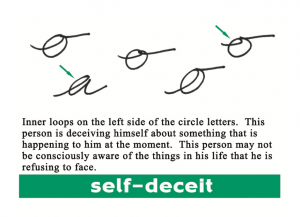 When you spot inner circles towards the left in circle letters like ‘a’ and ‘o’, you can figure out that the writer deceives himself. Whether or not he is aware of it, he fears facing the reality of the situation.

The truth hurts, so he avoids it. People with self-deceit are the only group of people who consistently deny handwriting analysis is correct. It’s correct about other people, just not about them.  LOL.

So would you hate a liar when you understand that there is a genuine reason for him to lie? No, you wouldn’t “hate him”, but you might avoid him. , as you now know, for the liar or the one who has a tendency to keep secrets, it all boils down to

It all boils down to defense mechanisms. These mechanisms are created by their subconscious to provide defense from the negative impact of a potential situation.

Here is a great example of someone with LYING LOOPS.  Notice the small inner loops from both sides? 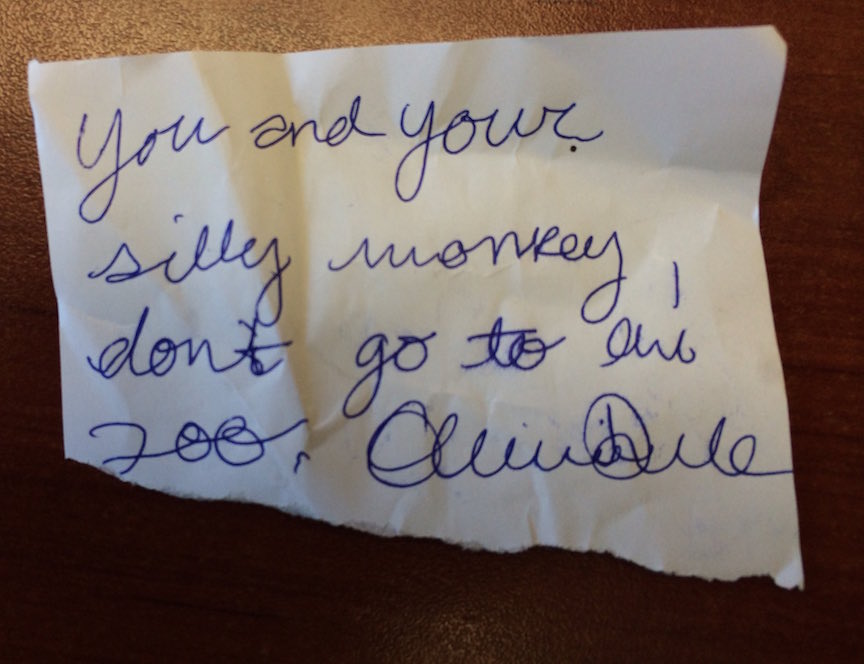 Often, people lie out of fear, they always have their guards up trying to ensure that they don’t spill the beans and give out their weakness, worrying it can be used against them. 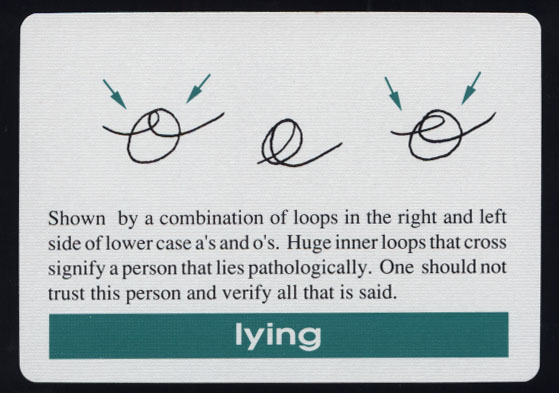 Handwriting Analysis teaches you to look beyond their lies and break their defenses, empathize with their fears and understand the real reason behind their lies. It refrains you from judging people unless you understand the context of their lies. It teaches you to delve deep into the disease and correct it from the roots, instead of just giving over the counter solutions. This is where grapho-theraphy comes in, it changes a person’s fears from their roots in order to reroute the brain until the fears disappear, resulting in the defense mechanism to completely vanish.

In brain science, this phenomenon is also known as neuro pruning or plasticity where a defense mechanism such as lying disintegrates after the fears that stimulate lies cease to exist. Hence, grapho-therapy is a deeper but a permanent solution unlike over the surface temporary solutions. It focusses on one trait at a time and changes the fear to break the defense mechanisms instead of directly changing the slant, which is a manifestation of an entire lifetime of accumulated emotional responses. Thus, Handwriting Analysis is a holistic approach to overcoming the flaws and magnifying the positive to extract the best out of you!