Hi, this is Bart Baggett and I’m going to analyze the handwriting sample of Andy Kaufman. The famous comedian / performing artist that passed away in 1984 from lung cancer and a subject of the Jim Carrey movie Man on the Moon.

Click play to listen to Bart’s analysis or read it below.

If you have not learned to analyze handwriting yet, it’s a pretty amazing science. We’re going to look at some of the things that we see in Andy Kaufman’s handwriting and it really explains some of his character and it also leaves a lot of questions to be answered. One of those questions for example is the handwriting we’re looking at from 1969. So what occurs between 1969 when Andy is a freshman in college to 1979 ten years later, by all public accounts, is pretty crazy. He’s wrestling women, he’s cussing out audiences, he’s getting fired from Taxi (a famous sitcom here in America) and eventually ends up dying. So he lived a very controversial life.

Now the first thing you notice about Andy Kaufman’s handwriting is the entire baseline slants to the right and what that means is a sense of depression or dejection. It’s interesting that handwriting does reveal some of the same things in our body language and even in our language. For example, even through optimism and pessimism, our language says, “We’re feeling down.” With body language, we actually point our head down. And likewise, language says things are looking up, things are getting brighter if we’re in an optimistic mood. Well if the handwriting always slants down to the right where the right side of the paper looks almost tilted, that is a sign of depression. If this gets too out of control, if it gets so slanted and the end looks like a droopy spaghetti noodle, that’s a sign of suicidal nature. Now Andy Kaufman doesn’t show any suicidal nature here, homicidal maybe! (joking), but not suicidal.

Now I don’t know anything about Andy Kaufman’s medical background, but based on what I’ve seen in the movie and the

handwriting, I would not be surprised if he suffered from some sort of depression or manic depression. Now of course in 1969, they didn’t have a simple way to treat him. But what you do find, is that he was a very bright guy. Andy has lots of sharp point R’s, M’s and N’s, which is a sign of analytical thinking. An impatient, fast mind.

His handwriting is fairly small, not really small, but there’s some focus there. That’s the ability to focus and concentrate. Also a very bouncy baseline, which keeps him very busy in lots of different things. Possibly a bit clumsy, we usually see this in people who choose to move in lots of different directions. Also, people with bouncy baselines aren’t as anal-retentive or necessarily as rigid.

The most interesting thing about Andy Kaufman’s handwriting is not that this is the handwriting of a lunatic, because he really doesn’t. His handwriting in general is a lot like people in society, he’s got a lot of good qualities and he has a couple of qualities that would make him tick differently.

One of those is called resentment. I’ve pointed some arrows at strong rigid beginning strokes in the letter P in ‘people’ and ‘parties’ as well. It’s on the 2nd page, about the 6th line down on his note to Elvis Presley. Which is kind of funny in itself, a freshman in college writing to Elvis saying he’s going to shake his hand one day. I don’t think he ever did, but I know he imitated him quite hilariously. Now the resentment is hard angle rigid upstrokes.

Let me tell you about the character in this, I don’t see this very often. I’ve seen it in very negative people, I’ve seen it in one tax collector in Massachusetts, and I’ve seen it in almost all serial killers. So that’s why I made the crack on homicidal tendencies earlier. People with lots of resentment tend to be angry in general. When they’re angry in general, they get angry at people and sometimes those people don’t necessarily deserve to be angry at. So you find them being angry at lots of different things, and Andy does have lots of anger.

His anger comes out in the form of sarcasm, we do see sarcasm in his handwriting and lots of enthusiasm. Also, his Y’s are very narrow which means he doesn’t trust a lot of people. They’re not completely narrow on the second page, but the first page they are shown retraced, which would be his tendency not to trust people. We see that in his life as he continues to alienate all but 2-3 close people in his life. I believe it was only his girlfriend and his agent who really knew whether or not the things he said were jokes or truly how he felt.

Now you can also look at the D and T, which is a symbol of self-image and how sensitive to criticism we are. If you have a long skinny D, it means that you’re very sensitive to your ego. But not sensitive to criticism, which means if its tall and skinny, it means “I care about my pride, I care about my reputation, I care for people to respect me, but I don’t care whether you like what I’m wearing or not”. It’s kind of a fine line there, because it seems like in either case, we’re being sensitive to what people think of us, but the loop in the D, which Andy does not have indicates the need to please. If the D is tall, but lacks the loop, it’s a sense of arrogance, which can be condescending. That’s when people become difficult to work with, because they really do believe their own publicity so to speak. So he’s got a dose of arrogance, his T-bars fluctuate from middle to low to high, so he’s got a good self-image and maybe some low-self image in some cases. Generally, his self-image is good, but it never matches up with his high T-bar, which is why he’s always trying to get approval from society. And fame is a very quick and easy antidote to handle that need.

We can see some stubbornness in his t-bars, they look like Indian teepees which is why he lets jokes get way out of hand. 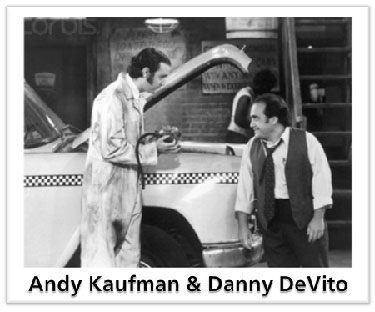 Can you see his sense of humor in the handwriting? Sure, there are wavy t-bars which show silliness.

Do you see an analytical mind? Sure.

But do you see someone that is a total lunatic? No, he’s not a total lunatic. But he is quirky, arrogant, has lots of enthusiasm, and he has a bit of depression. Now the depression can turn his head sideways once and a while (if he did have clinical depression). Which like I said earlier, wouldn’t be treated the same way in 1969 like it’s treated today.

I don’t know if you knew you could see all those health issues in handwriting. Well it’s kind of a grey area in handwriting analysis. But given anybody’s experience and if you interview lots of people, you do see trends in personalities (especially psychological problems with health, because it’s directly related to our physiology and our personality traits).

[divider_title title=”What do you see in Andy’s handwriting? Post your comments” heading=h3]